The main street of the slum lives in slow motion. If the judgment of the Administrative Court has stalled the destruction, at least temporarily, the prefecture announced that they will appeal the judgment. And police raids continue to ensure the closure of trades (see here, here, here and there).

On the threshold of the deserted restaurant, a friend invited us to stop to drink some tea. By the way, he shows the extinct generator and explains. Before, with the restaurant, he was earning some money, enough to buy food, send some to his family, and to buy gasoline for the generator. Now people continue to visit him to recharge their phone, but there is no electricity. With what could he pay gasoline now that he has no more job?

Two days later, a little further down the main street, it is friends of friends who invite us to drink tea in the shop where they live. Again, the shelves are empty. But during the afternoon poeple pass by to discuss, sometimes to say hello, often to ask for something. Something to buy, but also to borrow a tool or seek for information. The shop is not only a selling place, but a place with different scopes, where to find different things.

Therefore, closing the shops and restaurants of the slum is a harmful action for all those who benefit from their existence, the services they gave are way beyond the mere trade. The closure won’t make the state earn money, it is, on the contrary, very expensive – 150 police officers mobilized the first days of the operation. It is a shortfall also for those shops in Calais where migrants where buying their ingredients.

Migrants will find other ways to get by, we can have confidence in their creativity, and there’s probably something already ongoin.

But a smart and conscious state of public good would have found a way to support this creativity, to find a legal framework for this activity (knowing that a lot of the people who run these shops have a residence permit) and to meet standards of hygiene (knowing that, despite the apocalyptic statements of the prefecture, no customer has ever got intoxicated).

The migrants won’t disappear anytime soon (see here and here), and it is definitely the time to adopt a constructive approach, based on the reality of facts and the potential of people. 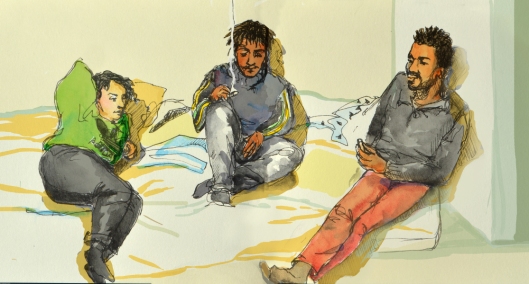 2 thoughts on “Shantytown: shops in suspense”