On 21 September 2015 the police brutally evacuated the last encampments of Exiles from the centre of Calais, and in the wake of that, from the end of March, destroyed some of the slum that had been built where the authorities had forced people to concentrate. On the 22nd September,  police bombed the slum with tear gas from the port bypass overlooking it .

The prefect of Pas-de-Calais had to recognize that the slum had reached 6000 inhabitants, a probably underestimated figure. In late October the “respite centers”were launched, which would then become “Reception and Orientation” centres, to push Exiles away from Calais, while daily roundups sent groups of 50 Exiles to detention centers at the other end of France (see here, here, here, here and here).

In parallel, the bombing of the slum with tear gas grenades became more and more common, becoming daily events from November (see here, here and here). They diminished again after the destruction of part of the slum to create a “no-mans-land” (the term of the authorities) between it and the ring road leading to the Port harbour (see here and here).

With the prospect of the destruction of the northern part of the slum (see here and here), the gassings have resumed now every night. And sometimes during the day, when there is a traffic jam on the ring road and as Exiles try to board lorries, like on the afternoon of September 1st. Initially the Police pushed back the Exiles from the Highway using gas and rubber bullets, and then continued bombarding the slum without reason and risked starting a fire there (the grenades explode in flight and scatter many burning sub-munitions that can set fire to tents and tarpaulin shacks).

Furthermore, racial profiling is happening more and more in the stations of Nord Pas-de-Calais to prevent Exiles from boarding trains, even when having a ticket. These discriminatory checks are sometimes accompanied by arrests. 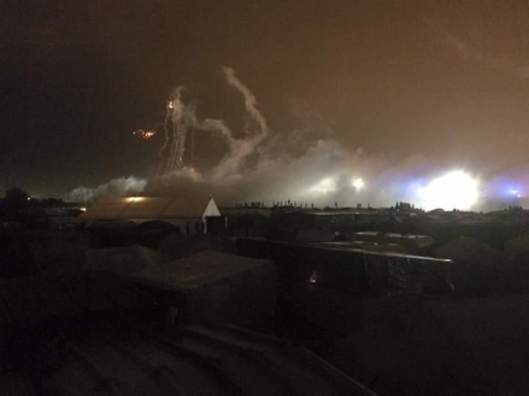 In the background the port ring road and the spots of the police spotlight. The grenade fire in the sky and on the ground the gas clouds. Photos taken by activists of Calais.

3 thoughts on “Destruction of the Calais shantytown: the use of violence”